After introductions by Hoover and Bill Warmoth, owner of Artisan Guitars, Paisley was presented his guitar for the first time.  After playing a few notes Paisley said, “I’ve never picked up a Santa Cruz that wasn’t magical.” He played a little more and added, “This is the type of guitar you build up to and the idea of one of my fans or contemporaries using it would make me proud.  I know if someone gets one of these they are getting exactly what I want them to have.”

Paisley and Hoover worked closely together to design a personalized, custom dreadnought based on SCGC’s Pre-War Dreadnought Model.  The Paisley signature model (The BP/W) honors Paisley’s dedication to the sustainability of treasured tone woods, built with his preferred customizations for playability, tone and look in mind.  He chose to partner with the small Santa Cruz Guitar Company, who makes approximately 600 guitars a year, from his desire to be associated with quality.  He wanted his name on a handmade instrument that his fans and guitar aficionados alike could trust. 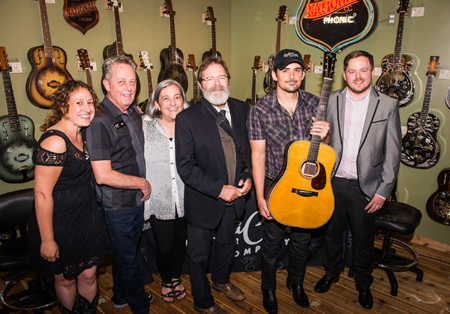